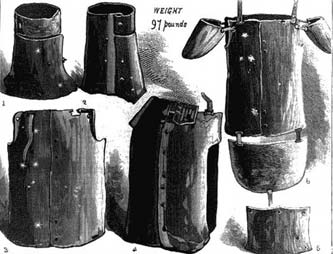 DearREADERS,
This graphic caught my attention, when thumbing through magazines to find another tidbit to share with you.

It's captioned: "The Kelly Gang's crude suits of armor weighed 97 pounds each", in an article by David A. Norris titled "Bushrangers: Outlaws of Australia’s Wild Frontier", History Magazine April/May 2009, pages 48-51.

Ol' Myrt here has read about waves of prisoners from England being shipped to Australia, but I'd had always thought the deportation scheme was just a way to get the poor off the street and out of debtor's prisons. Indeed, when beginning the read of "the most famous Bushranger of all: Ned Kelly" I see Ned's deportation was due to a conviction in Ireland for stealing 2 pigs. It sounded to me like the lad was merely hungry.

Read David's article to find out just how the Kelly Gang's life of crime necessitated wearing protective armor.
Not quite as fancy as the jousting gear worn by the Knights of the Round Table, eh?

Happy family tree climbing!
Myrt :)
DearMYRTLE,
Your friend in genealogy.
Posted by DearMYRTLE at 6:00 AM

Thanks, Les.
Do you have a photo or sketch of this individual. He sure died young, didn't he? Must have been a hard life.

If this gentleman was your ancestor, perhaps you have a photo or can take a digital copy of some related document or artifact to add to this blog entry. It might be a nice way to spotlight this man. You may write to me personally at Myrt@DearMYRTLE.com for assistance.

Dear Myrtle a google search will hilight Australia's most famous bushranger. A search for a photo will bring up several including one of his death mask, plus advertising for the movies that have been made about him.