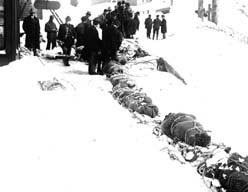 ABOVE: Some of the first bodies to be recovered from the Wellington avalanche disaster. (Photo courtesy of Museum of History & Industry, Seattle, WA).


Late last month, at the Southern California Genealogical Society Jamboree, Ol' Myrt here met once again with her good friend footnoteMaven who had traveled down from the greater Seattle area. Needless to say, all sorts of memories of the greater Seattle area have since poured into my mind. In fact, at this time I am longing for the more temperate climes offered by the Pacific Northwest, as the short side trip to the Grand Canyon resulted in heat exhaustion for this gramma.

But the Pacific Northwest isn't without it's challenging weather. "Late in the afternoon of February 22, the six-car train carrying more than 100 passengers left Wenatchee, Washington to begin its fateful ascent to the Cascades. It was followed an hour later by the No. 27 Fast—Mail. Through the blizzard, the trains finally arrived at the east portal of the Cascade Tunnel, a small station stop. They were met by a big, broad shouldered man who had concern and anxiety written all over his rugged Irish face."

Both the Museum of History and Industry and the University of Washington Special Collections Division provided author Gary Sherman photos to illustrate "Snowslide of the Century: Tragedy at Stevens Pass", [History Magazine, April/May 2009, pages 17-20.]


“SO FAR AS loss of life and damage to property is concerned, I believe this is the worst experience we have had.” This is the tragic observation made by H. H. Parkhouse, a Great Northern Railway official on the scene at Wellington, Washington on 4 March 1910.

It is a good idea to check local newspapers and genealogical society magazines published in the area where your ancestors once lived to find out what challenges of nature, culture, religion and ethnic orientation may have affected your progenitors.

As a child I loved skiing Steven's slopes, but was blissfully unaware of the fact that the 1910 Steven's Pass incident is considered one of America’s deadliest avalanches.

It was so good to see you my friend. It is a beautiful 78F today in Preston.

Yes, but the PNW has its challenges.

If you make it to town, let's have lunch!

The wedding comes first, but NEXT July we'll be up to Orcas for sure, so will see you on the way.