Zeppelins (not the Led type) 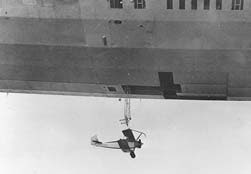 ABOVE: The USS Akron carried fighter planes inside the hull, the places could be launched and recovered in mid-air.
DearREADERS,
My father-dad called them dirigibles. Other than the Goodyear "blimp" hovering over football fields or hydroplane races in my youth, and the terrible tragedy of the Hindenburg, Ol' Myrt here knew little about Zeppelins until David A. Norris wrote about the ages of the great airships in his article "Zeppelins: Luxury Liners of the Sky" published in the Feb/Mar 2009 issue of History Magazine.
"The passenger zeppelin was once a symbol of modern mechanical and technological progress. As long as battleships, these grand passenger liners of the skies were buoyed in the air by vast bags of hydrogen. Their passengers enjoyed leisurely trans-Atlantic journeys of luxury and comfort. Then, a single spark ignited a catastrophic blaze that destroyed the finest one in the world, Germany's Hindenburg, ending the age of the zeppelin.
A zeppelin is on of three types of lighter-than-air craft, or airships. Also known as rigid airships, they held hydrogen-filled gas bags, called cells in a light metal frame. A blimp is an airship without a metal frame, with a gondola and engine mounts attached to the gas bag. In between were semi-rigid airships, using gas bags atop a partial frame." See pages 13-17.
David discusses the history and uses of these flying machines, though I was surprised that instead of aircraft carriers, after WWI, the US Navy ordered several to deploy small planes as pictured above.

It would be interesting to hear from my DearREADERS who may have had an ancestor that piloted one of those zeppelins or the small planes they could deploy. Perhaps some trace of personal insights could see the light of day.
Happy family tree climbing!
Myrt :)
DearMYRTLE,
Your friend in genealogy.
Myrt@DearMYRTLE.com
Posted by DearMYRTLE at 3:10 AM